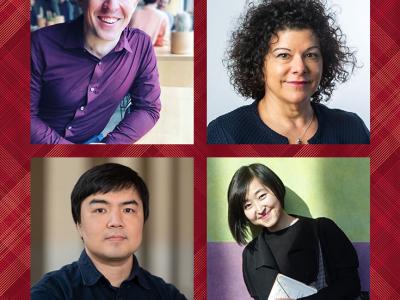 Keenan Crane received the inaugural Michael B. Donohue Career Development Chair. Crane's work focuses on algorithms for processing and analyzing three-dimensional geometric data. He joined the SCS faculty in 2015 after earning his Ph.D. in computer science from the California Institute of Technology and completing a postdoctoral fellowship at Columbia University.

Crane's professorship was created through a gift from Michael Donohue, who graduated from Carnegie Mellon University in 2001 and was an early employee at WhatsApp. Donohue recently co-founded HalloApp, a new private social media network that allows users to connect with family and friends free from the bots, trolls, algorithms and other unpleasant aspects common in most apps.

"A lot of my success largely came from CMU. I don't think I could have accomplished so much otherwise," Donohue said. "This professorship is an opportunity to give back to the university and to maintain a connection to the next generation of researchers and their work."

Donohue, who earned a double major in computer science and political science, said CMU offered him access to people who were experts in their fields and gracious enough to invest time in him. He continues to mentor students through the Swartz Center for Entrepreneurship.

Jodi Forlizzi was named the Herbert A. Simon Professor of Computer Science. Forlizzi is the associate dean of diversity, equity and inclusion for SCS and the outgoing director of the Human-Computer Interaction Institute. She works on using artificial intelligence as a design material and studies how AI will affect the future of work and how humans interact with AI. Forlizzi earned a self-defined Ph.D. in human-computer interaction in 2007 and a master's degree in interaction design — both from CMU.

The Herbert A. Simon Professor of Computer Science chair was created in 1992 in memory of Simon, a university professor and Nobel Laureate who helped found the field of AI and establish CMU as one of the world's foremost computer science institutions.

Lining Yao received the Cooper-Siegel Junior Chair. Yao directs the Morphing Matter Lab, which develops processes, materials, tools and applications for adaptive, dynamic, and intelligent morphing matter. She came to CMU in 2017 after earning her Ph.D. and master's degree from the Massachusetts Institute of Technology's Media Lab.

Jian Ma was named the Ray and Stephanie Lane Professor of Computational Biology. Ma's research focuses on developing machine learning algorithms to reveal the structure and function of the human genome and cellular organization, and their implications for human diseases. He joined CMU in 2016 from the University of Illinois at Urbana-Champaign, where he was a faculty member.

A reception recognizing both the recipients and the benefactors who made their professorships possible will be held during the spring semester.