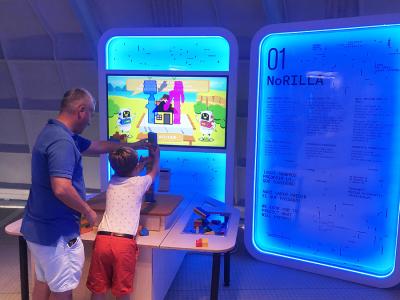 A project from the School of Computer Science's Human-Computer Interaction Institute that uses artificial intelligence to assist children in hands-on educational experiments is one of six AI-focused projects selected for an exhibit at CaixaForum Valencia, a new museum in Valencia, Spain.

NoRILLA, a mixed-reality learning platform that combines physical and virtual worlds to improve children's inquiry-based STEM learning, is featured as part of the #LaNube{IA} experience, which looks at the educational potential of AI and identifies its use for students, teachers, families, institutions, researchers and businesses.

The NoRILLA display features an intelligent earthquake table, on which visitors stack blocks and use prompts from an AI gorilla to determine if their towers will fall. It's a lesson in physics, made more enjoyable and understandable by interactive technology developed by HCII faculty members Nesra Yannier, Ken Koedinger and Scott Hudson. The technology uses a camera to track what users are doing in the physical world and explains concepts to help inform their decisions throughout the experiment.

"A lot of museum exhibits are hands-on, but they don't all have the interactive AI layer guiding users through the underlying principles," Yannier said.

In a study published in Science, the NoRILLA team found that U.S. children who encountered hands-on exhibits with this added AI interaction were four times more engaged in the experiment than those who did not use the AI.

NoRILLA has been used in museums, school districts and informal learning programs across the United States, but the exhibit at CaixaForum Valencia is its first exposure to an international audience.

"We weren't sure how people outside the U.S. would interact with it, and if people in Spain would have the same requirements or needs," Yannier said.

She worked closely with museum facilitators, who helped translate NoRILLA into Spanish and Catalan. Although typically geared toward children, NoRILLA attracted museum visitors of all ages during its grand opening in Valencia.

"It was great to know that there's an interest in NoRILLA on an international scale and to see that people in different parts of the world do, in fact, have similar educational needs," said Yannier, who went to Spain for the opening.

Carles Sierra, director of the Artificial Intelligence Research Institute of the Spanish National Research Council and a member of the exhibit selection committee, said their goal was to showcase robust and successful technologies that would help visitors imagine how education could be improved when mediated by AI.

"We wanted students, teachers and the general public to understand the possibilities that these systems offer for adaptive and collaborative learning," Sierra said. "All in all, NoRILLA is an excellent example of how AI can be effective in learning. It's a clear use of nonintrusive computer vision techniques for educational purposes."

What's more, NoRILLA also helps educate the public on the good AI can do.

"Some of the visitors commented that they are usually scared of AI and robots," Yannier said. But when they saw our exhibit, they said, 'Oh, AI can actually be good for people.' It's changing their mindsets."

The exhibit is set to be on display for a year at CaixaForum Valencia. Meanwhile, Yannier says plans are underway to continue deploying the technology in both informal and formal learning environments in the U.S and internationally. In addition to the interactive earthquake table, the researchers have also created a module that helps children explore speed and velocity by racing cars down ramps. They also plan to create new modules exploring other scientific topics.