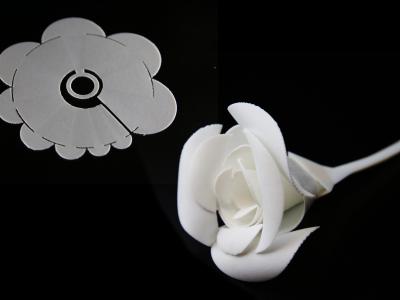 Researchers at Carnegie Mellon University have used an inexpensive 3-D printer to produce flat plastic items that, when heated, fold themselves into predetermined shapes, such as a rose, a boat or even a bunny.

Lining Yao, assistant professor in the Human-Computer Interaction Institute and director of the Morphing Matter Lab, said these self-folding plastic objects represent a first step toward products such as flat-pack furniture that assume their final shapes with the help of a heat gun. Emergency shelters also might be shipped flat and fold into shape under the warmth of the sun.

Self-folding materials are quicker and cheaper to produce than solid 3-D objects, making it possible to replace noncritical parts or produce prototypes using structures that approximate the solid objects. Molds for boat hulls and other fiberglass products might be inexpensively produced using these materials.

Yao will present her group’s research on this method, which she calls Thermorph, at CHI 2018, the Conference on Human Factors in Computing Systems, April 21-26 in Montreal, Canada.

Other researchers have explored self-folding materials, but typically have used exotic materials or depended on sophisticated processing techniques not widely available. Yao and her research team were able to create self-folding structure by using the least expensive type of 3-D printer — an FDM printer — and by taking advantage of warpage, a common problem with these printers.

“We wanted to see how self-assembly could be made more democratic —accessible to many users,” Yao said.

FDM printers work by laying down a continuous filament of melted thermoplastic. These materials contain residual stress and, as the material cools and the stress is relieved, the thermoplastic tends to contract. This can result in warped edges and surfaces.

“People hate warpage,” Yao said. “But we’ve taken this disadvantage and turned it to our advantage.”

To create self-folding objects, she and her team precisely control this process by varying the speed at which thermoplastic material is deposited and by combining warp-prone materials with rubber-like materials that resist contracture.

The objects emerge from the 3-D printer as flat, hard plastic. When the plastic is placed in water hot enough to turn it soft and rubbery — but not hot enough to melt it — the folding process is triggered.

Though they used a 3-D printer with standard hardware, the researchers replaced the machine’s open source software with their own code that automatically calculates the print speed and patterns necessary to achieve particular folding angles.

“The software is based on new curve-folding theory representing banding motions of curved area. The software based on this theory can compile any arbitrary 3-D mesh shape to an associated thermoplastic sheet in a few seconds without human intervention,” said Byoungkwon An, a research affiliate in HCII.

“It’s hard to imagine this being done manually,” Yao said.

Though these early examples are at a desktop scale, making larger self-folding objects appears feasible.

“We believe the general algorithm and existing material systems should enable us to eventually make large, strong self-folding objects, such as chairs, boats or even satellites,” said Jianzhe Gu, HCII research intern.

An, Gu and Ye Tao of Yao’s research group are lead authors of the research paper, collaborating with other researchers from CMU, Zhejiang University, Syracuse University, University of Aizu, and TU Wien.

A video showing the Thermorph self-folding process is available below: