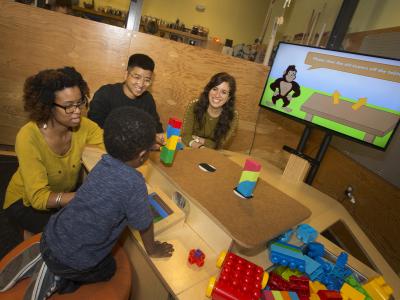 Most maker spaces and museum exhibits currently focus on hands-on exploration, but this mixed-reality system blends the digital and physical worlds, adding an intelligent AI layer on top of physical experimentation. By combining hands-on construction with AI-enhanced guided discovery, the team has created a new genre of intelligent science exhibits that increases informal learning and engagement.

The NoRILLA intelligent science station is unique because a child can sit down at a museum exhibit table and learn applied physics principles by experimenting and building towers with real blocks. The exhibit’s AI vision detects the child’s actions in the real world, and this data passes through the system to determine the appropriate feedback. From there, NoRILLA’s on-screen gorilla provides helpful guidance based on the child’s work and prompts them through the scientific inquiry process. This interactive feedback process allows children to learn STEM concepts without being dependent on knowledgeable and nearby staff or parents.

With the support of this grant, long-term NoRILLA installations will soon be available through four children's museums: Carnegie Science Center (Pittsburgh), Children’s Museum of Atlanta, Please Touch Museum in Philadelphia and Children's Discovery Museum of San Jose, as well as after school programs for underserved kids at the Boys and Girls Clubs of Western PA. The exhibits will eventually serve an estimated 1.5 million children and families every year.

"So much of science is experienced by students as memorization of a bunch of facts. These intelligent science stations bring the excitement of doing science to young children and they discover the facts and much more in the process," said Koedinger. “The project shows dramatic learning gains from an approach that has kids thinking scientifically with just-right guidance provided by a supportive AI agent. Our team is particularly distinctive in drawing from multiple disciplines including AI, the psychology of learning, and sensing technology.”

“With this grant, we are excited to enhance the AI capabilities of our intelligent science exhibits, adding more personalization and adaptivity to our system, generalizing and expanding it to different content areas and contexts, while also working with multiple partners around the US to make our system beneficial for more children,” Yannier said.

“We found evidence that the Intelligent Science Exhibit produces substantially better learning for both scientific and engineering outcomes and higher levels of engagement as measured by length of time voluntarily spent at the exhibit with about 4 times more time spent at the intelligent science exhibit compared to a standard exhibit,” said Yannier.

She added, “Our research showed a tenfold learning improvement when having our intelligent AI-based guided inquiry layer on top of physical experimentation. Combining guided discovery and hands-on construction improves children's learning and engagement significantly, as compared to traditional maker spaces and museum exhibits that only focus on hands-on exploration.”

Yannier earned her PhD in HCI in 2016 and began researching mixed-reality learning as the focus of her thesis. She received numerous awards to take her research forward and bring it into the real world, including a Mister Rogers Scholarship from Emmy’s College Television Awards, Innovation Fellowship from Schwarz Center for Entrepreneurship, Golden Award in Cultivating Curiosity at Reimagine Education Competition, as well as grants from PNC, EQT and McElhattan foundations.

NoRILLA is currently being used in many school districts in Pennsylvania and Ohio.