Self-Healing Devices Gain or Regain Function After Being Cut 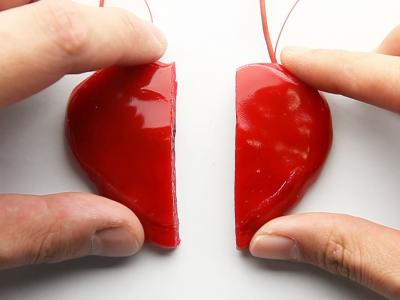 A "smart" polymer cast that automatically seals itself around a broken arm, a membrane that can sense where it has been cut, and pneumatic actuators that can be cut and reconfigured into different shapes are some possible applications for a new self-healing material developed at Carnegie Mellon University.

The composite material has unique characteristics that allow it to heal and make it possible for devices made from it to regain their functionality — or gain new functionality — after being cut. When the cut ends of the material are placed back together, the pieces reconnect and the seam between them eventually disappears.

The research team, led by Lining Yao, assistant professor in the Human-Computer Interaction Institute (HCII), and Mohammad Islam, professor in the Department of Materials Science and Engineering (MSE), have demonstrated the material's self-healing qualities by building a variety of sensors and actuators. And they are working on new applications that enable devices to self-assemble and self-actuate.

Other researchers have developed self-healing materials, Islam noted. In most cases, those materials rely on the flow of reagents for healing. Reagents encapsulated within the material, for instance, might be released after the material is cut and repair the damaged areas.

Because the material is functional when it heals, it may be possible to design sensors or other electrical devices as modules that can be assembled or rearranged as necessary, Islam said.

"You can build things sort of like LEGO pieces," he said. It might also be possible to design devices that can be produced as standard sheets or in other forms and then cut into a desired shape for use.

One of the proof-of-principle devices created thus far, for instance, is a soft controller that responds to touch. In normal mode, one such controller can detect a finger press. Connecting and healing two controllers lengthwise can create a keyboard. Two connected controllers, when wrapped around a person's wrist, can serve as a slider device.

"Now, if I cut it into four pieces, each one will respond to my finger," Yao said. And, after use, the pieces can heal together to form the original two controllers.

A pneumatic actuator made from the material might bend in one direction. As the researchers have demonstrated, it's possible to cut it in the middle, turn the bottom half 180 degrees and reattach it to create an actuator that bends into an "S" shape.

Islam said there are limits to this ability to rearrange pieces in these electrical devices. "We can reconfigure, but not rewire," he explained. But it's also possible to design redundant circuits into the devices to maximize the degree to which users can customize them.

The researchers reported on the material and their first set of devices last fall at the Association for Computing Machinery's Symposium on User Interface Software and Technology (UIST) in New Orleans. They now are working on applications that involve self-actuation and self-assembly.

"I foresee a possibility that the interfaces we encounter in our daily lives will become more and more autonomous, more like a 'life-form' that helps us rather than something that is used by us," said Koya Narumi, a Ph.D. student at the University of Tokyo who was a visiting student in Yao's Morphing Matter Lab at CMU. He and Fang Qin, a master's student in the Electrical and Computer Engineering Department, were the lead authors of the study.

One idea for the material is to build a reusable arm cast that molds itself around a broken arm and heals its seam. Such a cast might adjust itself over time to speed healing.

Islam emphasized that the research has been strengthened by involving researchers across disciplines.

"We (in materials science and engineering) could make the material in a simple sense, but Lining has huge expertise in designing systems," he said. "By having this collaboration, we can do things we couldn't do by ourselves."