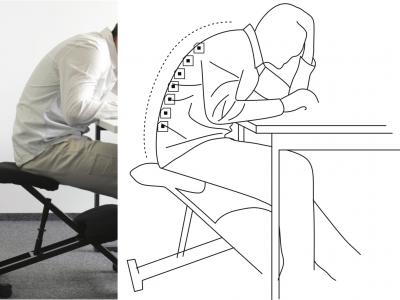 Carnegie Mellon University researchers have found ways to track body movements and detect shape changes using arrays of radio-frequency identification (RFID) tags. RFID-embedded clothing thus could be used to control avatars in video games — much like in the movie "Ready Player One." Embedded clothing could also tell you when you should sit up straight— much like your mother.

RFID tags are nothing new, which is part of their appeal for these applications, said Haojian Jin, a Ph.D. student in CMU's Human-Computer Interaction Institute (HCII). They are cheap, battery-free and washable.

What's new is the method that Jin and his colleagues devised for tracking the tags, and monitoring movements and shapes. RFID tags reflect certain radio frequencies. It would be possible, but not practical, to use multiple antennae to track this backscatter and triangulate the locations of the tags. Rather, the CMU researchers showed they could use a single, mobile antenna to monitor an array of tags without any prior calibration.

Just how this works varies based on whether the tags are used to track the body's skeletal positions or to track changes in shape. For body-movement tracking, arrays of RFID tags are positioned on either side of the knee, elbow or other joints. By keeping track of the ever-so-slight differences in when the backscattered radio signals from each tag reach the antenna, it's possible to calculate the angle of bend in a joint.

"By attaching these paper-like RFID tags to clothing, we were able to demonstrate millimeter accuracy in skeletal tracking," Jin said.

The researchers call this embedded clothing RF-Wear and described it earlier this year at the UbiComp 2018 conference in Singapore. It could be an alternative to systems such as Kinect, which use a camera to track body movements and can only work when the person is in the camera's line of sight. It also could be an alternative to existing wearables, which generally depend on inertial sensors that are expensive, difficult to maintain and power hungry, Jin said.

RFID-embedded clothes might also be an alternative to wrist-worn devices, such as Fitbit, for activity tracking or sports training.

The technology for monitoring changes in curves or shapes, called WiSh (for Wireless Shape-aware world), also uses arrays of RFIDs and a single antenna, but relies on a more sophisticated algorithm for interpreting the backscattered signals to infer the shape of a surface.

WiSh was presented earlier this year at Mobisys, the International Conference on Mobile Systems, Applications and Services, in Munich, by Jin and Jingxian Wang, a Ph.D. student in CMU's Electrical and Computer Engineering (ECE) Department. It could be incorporated into smart fabrics and used to track a user's posture. It could also be embedded in a variety of objects.

"We can turn any soft surface in the environment into a touch screen," Wang said. Smart carpets, for instance, could detect the presence and locations of people, or be used to control games or devices. Soft toys could respond to or otherwise register squeezes and bends. Smart pillows might help track sleep quality.

WiSh also could be used to monitor the structural health of bridges or other infrastructure, Wang noted. The researchers measured the curvature of Pittsburgh's 10th Street Bridge by using a robot to drag a string of 50 RFID tags along the bridge's sidewalk.

"Weaving these tags into clothing will only add a minimal cost, under $1," Jin said. The most expensive part of these measurement systems is the antenna. But smartphones already use 13 MHz antennas for services such as Apple Pay. Adding a 900 MHz antenna for RFID-related applications might be feasible in future smartphones, eliminating the need for a separate device, he suggested.

In addition to Jin and Wang, the research team included Jason Hong, professor in the HCII; Swarun Kumar, assistant professor of ECE; and Zhijian Yang of Tsinghua University in China. The National Science Foundation and Google provided support for this research.