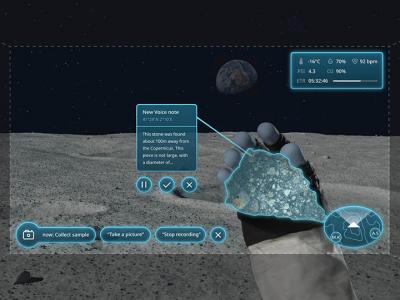 Students working on Carnegie Mellon University's Moon Buddy likely will not walk on the lunar surface as part of NASA's upcoming Artemis missions. But their technology could make its way into space as part of the agency's next generation of spacesuits.

The Moon Buddy team is part of the 2022 NASA Spacesuit User Interface Technologies for Students (SUITS) Challenge. The CMU team was one of 10 selected to participate and will test their design in May at NASA's Johnson Space Center in Houston.

Teams in the challenge must develop an augmented reality (AR) interface that will assist astronauts during moonwalks. The interface should help astronauts navigate the lunar surface by plotting routes and avoiding obstacles, assist with scientific experiments, and provide critical support during emergencies.

"NASA doesn't yet have a system that puts all this information in one place where it is easily accessible by astronauts. Augmented reality of this type hasn't existed in space travel before," said team lead Angie Bonilla, a junior in both the Human-Computer Interaction Institute (HCII) and CMU's computer science and art program. "We're developing a novel interface that could actually be used in space exploration."

NASA's Artemis missions aim to return humans to the surface of the moon by 2025. The spacesuits worn by Artemis astronauts will be much different than those worn by the Apollo crews who last walked on the moon in the 1960s. The suits will incorporate the latest technology, fit better, and offer more mobility and protection.

The team's approach incorporates voice control into the AR interface. With Moon Buddy, an astronaut could ask for their location or the location of crew members and see that information layered on a heads-up display. During sample collection, an astronaut could ask Moon Buddy to record a rock in their hand and show data from a visual analysis on the display. In the event of an emergency, Moon Buddy could share crew member vitals and locations.

Past spacesuit designs have relied on gestures, buttons, LED lights that indicate vitals, and notepads with critical information scrawled on them.

The CMU team — which comprises students studying augmented and virtual reality, human-computer interaction, information systems, cognitive science, computer science, and art — has worked with NASA staff throughout the project. Their mentor is actively testing spacesuit prototypes for the Artemis missions.

"We're working with primary researchers, with people who have actually tried this technology," said Ron Chew, an HCII senior who is also studying information systems in the Heinz and Dietrich colleges.

The team also talked to Jay Apt, a NASA astronaut in the 1980s and 1990s who made two spacewalks. Apt is a professor in CMU's Tepper School of Business and co-director of the Carnegie Mellon Electricity Industry Center. He told the team about the limitations astronauts face inside a spacesuit. Pressing buttons, accessing a touchscreen or making gestures with a hand can be incredibly difficult.

"In space, you have these huge gloves. Trying to close your fist could feel like trying to squeeze a plastic gallon of milk," Bonilla said. "That's when we realized it might be easier to shift toward a voice-based interface."

Even if none of their work ends up in NASA's new spacesuits, the challenge has been a valuable experience for the students. Matthew Komar, whose studies focus on augmented and virtual reality development, said Moon Buddy has given him a chance to apply his work to a real solution. Bonilla said when she watches the Artemis missions over the next decade, she will know she played a part.

"That is going to be monumental," Bonilla said.