Inside the Enigma Machine 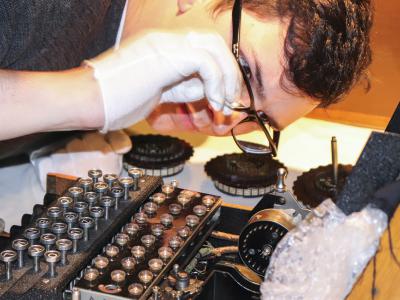 Researchers had a rare opportunity to peek "under the hood" of the Carnegie Mellon University Libraries' two Enigma machines, opening the World War II-era machines to photograph their carefully-crafted interiors and to locate and record the serial numbers printed on their rotors.

The University Libraries acquired the two encryption devices — one 4-rotor machine and one 3-rotor machine — in February 2018 as part of a collection of over 50 calculating machines, letters and books gifted to the university by author Pamela McCorduck, wife of the late Computer Science Department Head Joseph Traub. With this gift, CMU became one of a handful of American institutions to own an Enigma machine.

During a four-hour period on October 7, campus historians and researchers associated with History of Science and Technology at CMU (HOST @ CMU) — a cross-campus, interdisciplinary initiative to collect and preserve CMU's historical contributions to scientific and technical development — assembled in the Hunt Library Fine and Rare Book Room to open up the machines.

Andrew Meade McGee, visiting assistant professor of history and the University Libraries' CLIR Postdoctoral Fellow in the History of Science and Computing, described the procedure as a hands-on history exercise.

"Today, historians and engineers with screwdrivers are attempting to recapture the inner workings of a past technology and trace the intellectual connections between this electromechanical piece of the past and today's information technology ecosystem," McGee said.

Under the direction of Chris Harrison, Haberman Chair, assistant professor of human-computer interaction, and director of the Future Interfaces Group, three researchers partially disassembled the intricate machines. With only 318 Enigma machines known to exist today, the experience offered a once in a lifetime opportunity for Sven Mayer, postdoctoral researcher; Yang Zhang, doctoral student, and Karan Ahuja, doctoral student, all of the Human-Computer Interaction Institute.

"This is a really exciting opportunity to have a piece of computing history, to be a part of its history and to find out more about its history," Harrison said.

When the university received the Enigma machines, their model type, the year they were created, and the unit to which they may have been assigned during WWII were unknown.

"Part of our investigation today is to check out the condition of the machines to see what quality they've survived in, and to recover the serial numbers on the rotors in particular, which are a major clue to identifying when it was made, where it was made and the configuration it was in," Harrison said.

Mayer, a German speaker, translated inscriptions found inside the case.

In addition to serial numbers, the researchers inspected the construction of the boxes and internal mechanisms, the arrangement of keys and details on the plugboards, which allowed them to identify the models as an Enigma 3-Rotor A5005 and Enigma 4-Rotor M16681. Manufacturer marks that were revealed as a result of the disassembly suggested the factories of origin.

The presence of an “A” at the beginning of the serial numbers on rotors of the 3-rotor Enigma machine indicated that it was used by the German Army or Air Force. It appeared to be in such pristine condition that Harrison doubted that it had ever been used in the field.

Despite the clues unearthed during the disassembly, questions remain.

“While we found one of the machines on a list of all known machines in the world, the other appears to have been previously undocumented,” Harrison said. “The next steps will be some basic preservation and maintenance, and then reaching out to experts who can hopefully share more light on the provenance.”

The Traub-McCorduck Collection — which includes a Thomas Arithmometer, the first commercially produced mechanical calculator, and rare books by Charles Babbage, the 19th century mathematician considered by some to be a "father of the computer" — is managed by the University Libraries Special Collections and housed in the Fine and Rare Book Room on the fourth floor of Hunt Library.