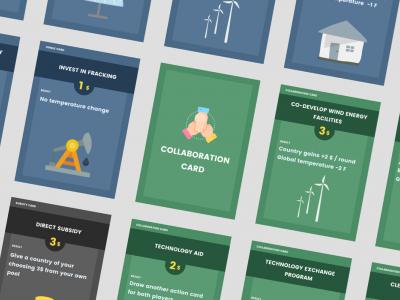 When it comes to climate change, a group of students at Carnegie Mellon University are ahead of the game — or, rather, designing it.

Transformational Game Design Studio, co-taught by Jessica Hammer and Lynn Kirabo in CMU's Human-Computer Interaction Institute (HCII), invites students to create games that change a player's thoughts or behaviors. This fall, Hammer and Kirabo's class partnered with Mert Tosun, a visiting Fulbright Ph.D. researcher who is studying sustainability, as their client. Tosun challenged the students to design games, which can take any form, that would change minds about climate action.

"We work with real-world partners on real-world problems and use games to make a positive difference in the world," said Hammer, interim associate director of the HCII. "At the end of the day, our goal isn't to give out a grade. It's to turn out a class of capable designers who can take game design skills and infuse them into whatever type of work they do."

The course is open to students across CMU. Hammer and Kirabo forge teams of multidisciplinary students to design a game addressing a different situation for each assignment. For Kirabo — a CMU alumna who received her Master of Science in information technology in 2015 and is currently a Ph.D. candidate in the HCII — its value lies in the way it helps students approach new problems. That was her experience taking the class as a student in 2018, and continues now as she co-teaches.

"In this class, students learn and practice multiple skills at the same time: how to distill a project brief into the core challenge that they are interested in tackling; how to create early and rough game interpretations of the problem; and how to give feedback in a constructive and actionable manner. These are skills we hope our students will take on as they start/continue in their careers," said Kirabo.

For the climate change games, students were tasked with incorporating evidence-based techniques for effective climate communication into their game design.

Role taking, like roleplaying as an animal, and appreciative activities in nature, for example birding, help generate empathy for the natural world. Norm activation deals with the sense of what is appropriate and aligned with one's values (if someone sees a piece of trash on the ground, do they feel as though a normal person would pick it up and throw it away?). Social identity theory involves feeling like part of a group that is engaged with nature stewardship. Hammer and Kirabo worked with Tosun to choose these four theories.

"One of the things games do really well is target your feelings, and often feelings lead to decision making," Hammer said. "These games are targeted toward people not yet engaged in climate action."

Cindy Lu, a fifth-year student with majors in psychology, global studies and human computer interaction, was on a team that created a game called "Deep Water." In it, players assumed the roles of various coastal lifestyles (fisher, surfer, restaurant owner) who must deal with the fallout of an oil spill over the four seasons of a year.

The game went through multiple iterations, aided by classmates playing through early versions of a game and giving feedback on their experience.

"I was never a huge fan of games, but this course changed my mind about how they can be a useful tool," Lu said. "The entire course is structured in a way to give us lots of feedback and help us learn, rather than providing black and white answers. I absolutely love this course."

Vincent Le, who is getting his master's degree in human-computer interaction, was intrigued by the climate change assignment. His team created a game that took on feelings of climate anxiety.

"College students see so much negative, cynical stuff in the news. How do you target climate anxiety and feelings of climate doom? We made a board game, that's how," Le said.

In their game, "Energy Utopia," players assumed the role of a world government making decisions about energy usage while trying to reduce the global temperature, as indicated by a central thermometer.

"Investing in oil or fracking is a cheaper, upfront investment, but you get less back over time. Renewable energy is rapidly becoming cheaper, even without government intervention, because the technology is progressing so fast," Le said.

And though the class is housed in the School of Computer Science, the course requires no programming. In fact, no new materials of any kind were allowed in the creation of the games, a nod to the theme of sustainability.

This is a repost from CMU News: https://www.cmu.edu/news/stories/archives/2021/december/climate-change-…