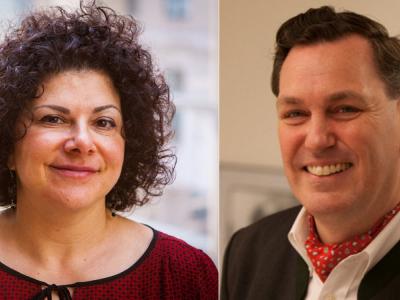 During the forthcoming MomenTUm, Eindhoven University of Technology will take the exceptional step of awarding two honorary doctorates - this usually happens only during a lustrum year. This has been prompted by the remarkable quality of the nominations, Rector Magnificus Frank Baaijens let it be known at a recent University Council meeting. The lucky recipients are the Austrian specialist in optical communication Peter Winzer and American Jodi Forlizzi, who researches the interaction between people and computers.

The American professor of Human-Computer Interaction Jodi Forlizzi has the luxury of having two honorary supervisors: Berry Eggen and Aarnout Brombacher. This isn't uncommon, according to Eggen, professor of Design for User Experience in Ambient Intelligent Systems. “It's partly due to the fact that Aarnout, as then Dean of Industrial Design, and I as Director of Research worked with Jodi Forlizzi some eighteen months ago during the successful research assessment of our department; she was on the assessment committee.”

But both professors have known Forlizzi longer than this, tells Brombacher. “Our department has close links with Carnegie Mellon University, where Jodi works. For example, two of our co-workers, Kees Overbeeke and Joep Frens, have held the Nierenberg Chair of Design there. Her research covers both Berry’s field and mine, and actually that of our whole department. Jodi is one of our own, you could say, and that makes her the ideal candidate for an honorary doctorate. What's more, as the Rector has already said, she is, of course, a very good researcher. Ten years ago Industrial Design nominated Bill Buxton for an honorary doctorate, and we see Jodi as being of the same caliber.”

Forlizzi combines an interest in artificial intelligence data and machine learning with a design-oriented approach, Eggen explains. “These are precisely the core areas of our department.” These days almost everyone is working on artificial intelligence and data, Brombacher points out. “What makes her unique is her ‘research through design’ approach to these subjects. Not just theoretical, but also going right ahead and making something and seeing how people use it. That's entirely consistent with our own research philosophy.”

The professors expect Forlizzi to be in Eindhoven often. “She also recently joined our department's Advisory Council,” says Brombacher, “so for that reason alone we expect to see her here more often.”

In her reaction, Forlizzi herself stresses her gratitude to the people around her. "I wish to thank my students and colleagues, without whom I could have accomplished very little. The collegiality and support I’ve received over the years have been tremendous, spanning institutions worldwide."

Forlizzi will receive the honorary doctorate on Friday, September 27, 2019 during the TU/e MomenTUm: the academic celebration of the year.