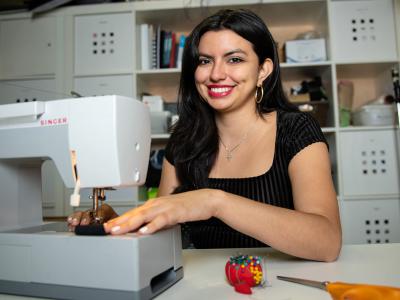 Carnegie Mellon University senior Ashley Burbano had glowing results in her summer research into understanding the applications of a material that lights up when stimulated.

A student in the College of Fine Arts studying design, Burbano has handled a wide variety of materials in her work designing costumes for fashion shows and other wearable artwork. This summer, though, she's applying science to her sewing.

As part of a summer project at the Morphing Matter Lab in the Human-Computer Interaction Institute in CMU's School of Computer Science, Burbano experimented with a soft elastomeric composite material, which luminates, or glows, when mechanical force is applied to it. Her research is funded through a Summer Undergraduate Research Fellowship (SURF) grant from the Office of Undergraduate Research.

The Morphing Matter Lab focuses on computational design and hands-on experimentation of responsive materials and how they can react to the environment and human behaviors.

"What drew me to the research specifically was the combination of science and fashion," Burbano said.

She was tasked with exploring different techniques of using the glowing material to demonstrate how the coated fibers in fashion garments responded to the movement of the human body and other applied forces, like the stretching a fabric would undergo in normal everyday wear to understand potential future applications of the fabric.

"I originally wanted to work in the Morphing Matter Lab because the work they're doing is interdisciplinary," Burbano said. "Being able to mix different types of fields together — or different professions — can create something unique."

For the first part of her project, she worked on creating physical prototypes of the material to better understand its limitations. The second part involves creating wearable items.

"At first, I made gloves, mainly because your hands are pretty controllable. The joints of the fingers give a lot of movement to the material," she said. Making smaller items like gloves helped to save on the material in order to make more prototypes. "Once I worked on that small scale, I was able to then scale it up and explore the different ways that it can be used."

She eventually moved on from the glove prototype to making a corset that a dancer could wear.

"When the dancer moves her arms left or right, it scratches the fabric on the front of the corset, which causes it to light up," she said.

Burbano drew on her experiences designing garments for CMU's annual Lunar Gala fashion shows. One year she created designs from common items found around campus and in another she repurposed fabrics from other designers.

Being part of a multidisciplinary team introduced a new way of working on design, she added. When she didn't understand something about the material science, she asked others on the team such as postdoctoral fellow Dinesh K. Patel.

"It was nice, because you don't have to know everything," she said. "I was able to use my strengths as a designer, where I understand fabric and the iterative process of prototyping but could pick his brain on the more scientific aspects of what we were working on."

Morphing Matter Lab Director Lining Yao said having a student with design experience like Burbano to assist with creating prototypes proved valuable for the research.

"We were able to teach her how to do the fabrication part, and she started to explore some fabric swatches and eventually put it into wearable form," said Yao, an assistant professor of human-computer interaction.

Patel said initially he thought that since the composite material he developed doesn't need an external light source to glow, it could eventually be used as a sustainable light source. But when Burbano came to the lab, she opened up some different possibilities for the material. "The designs that she made and her ideas for using the material on different parts of the body, I would not have thought of that," he said.

Burbano said she chose to attend CMU partly because of the variety of its academic offerings.

"I like how it isn't a traditional either tech school or art school, that there's a strong engineering program but also strong art programs," she said. "I've had the opportunity to meet a bunch of different people who have different skills and interests than mine and it inspired me, and showed me new ways of viewing the world."

The responsive luminescent fabric research is an example of the environment Yao says the Morphing Matter Lab tries to build into all its projects. "It's definitely empowered by the collaborative experiences and diverse disciplines of Carnegie Mellon."