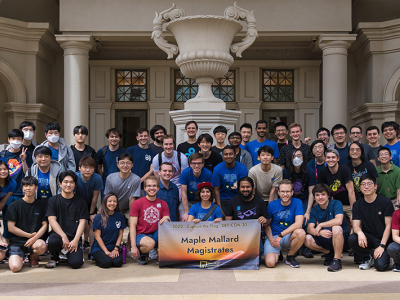 Carnegie Mellon University recently showed off its computer security talent by winning DEF CON's Capture the Flag competition — the "Super Bowl of hacking," — for the sixth time. The team included CMU students in the Plaid Parliament of Pwning, who joined forces with alumni startup Theori and a team from the University of British Columbia known as Maple Bacon led by School of Computer Science alumnus Robert Xiao.

Together the teams formed a new squad, Maple Mallard Magistrates, that took this year's crown. Each year, winners receive eight "black badges" — the most elite recognition in hacking. This year's win brought PPP's badge total to 48.

"If you're wondering who the best and brightest security experts in the world are, look no further than the Capture the Flag room at DEF CON," said David Brumley, an Electrical and Computer Engineering professor at CMU and the team's faculty advisor.

Over the course of the 72-hour hacking spree, 16 qualifying teams comprising students, industry workers and government contractors from around the world attempted to break into each other's systems, stealing virtual flags and accumulating points while simultaneously trying to protect their own.

"The hacking challenges this year spanned many different formats, exploring different skills and giving us all the chance to both showcase and stretch our abilities," said Jay Bosamiya, PPP's team captain, a Ph.D. student in the Computer Science Department, and a member of CMU's CyLab Security and Privacy Institute.