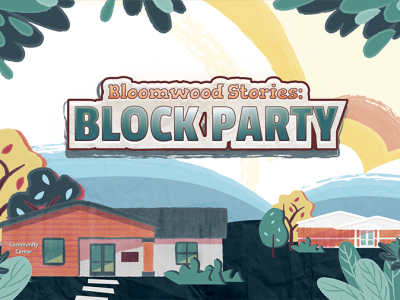 One of the most enduring pieces of advice from beloved children's television host Mister Rogers is to look for the helpers.

"A lot of the undertone of the game is that there are helpers everywhere," said Avonelle Wing, streaming coordinator for the OH Lab in Carnegie Mellon University's School of Computer Science (SCS) and narrative lead for Bloomwood Stories. "You just need to figure out who they are in addition to realizing that you have the capacity to be a helper."

In October, Bloomwood Stories won the Best Student Award at the International Conference on Meaningful Play at Michigan State University.

Bloomwood Stories began as an extension of the National Institutes of Health's All of Us research program as a "roll and move" board game, similar to Life or Sorry. Since then, a team of about two dozen researchers and programmers, including master's and undergraduate students from the Entertainment Technology Center and Human-Computer Interaction Institute (HCII), have updated it as a video game.

In the game, each action the player takes is prompted by questions about community or health care posed by different characters. The player has to choose between two or more possible answers to advance the story.

"There's so much nuance about what community looks like and how community can be that is scaffolded and structured into this game," Wing said. "I am excited because this is the first in an entire thought process about using games to model these things, and to talk about how research informs them. One of the things that brought me joy over the course of this project was seeing the thoughtfulness, deliberation, care and deep thinking that went into each aspect of the process."

For example, Evans modeled one of the characters, Mrs. Lee, after her own grandmother.

"Through my own character design, I got to explore in-depth both my relationship with my grandma and her relationship with herself," she said. "I've been around her my whole life, but I got to really dig deeper at the way that I see her. I got to see a transformation."

To account for accessibility, the full game lasts about 20 to 40 minutes and is designed to be played on a webpage or a desktop computer.

Lead researcher Morgan Evans, an SCS Ph.D. student, said after two years of collaboration on the game — particularly during COVID-19 isolation periods — it was eye-opening to hear reactions from conference-goers last month.

"As I was exhibiting the game, people were coming up and saying, 'I remember your game from the submission and we were so excited to see this as an entry,' and that was really validating," Evans said.

Gal Fleissig, an HCII research programmer who worked as programming lead on the game, agreed.

"We put so much effort into it," he said. "It was a really great team with many people who worked hard on it, so I was happy and grateful that it was recognized with the award."

The team's next steps include launching the game in at least 50 public libraries, supporting individual, family, and librarian-facilitated play sessions. The text-heavy game is also being translated into Spanish.

"My personal hope is that it will get to as many people as possible," Fleissig said.