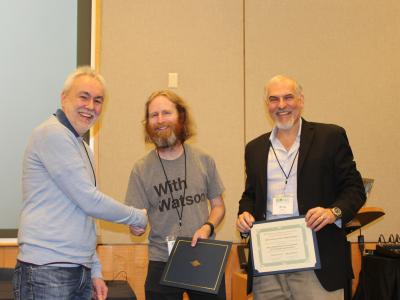 A 2006 paper co-authored by Jeff Stylos, then-Carnegie Mellon University Ph.D. student, and Brad Myers, professor in the Human-Computer Interaction Institute, will receive the Most Influential Paper Award at the IEEE Symposium on Visual Languages and Human-Centric Computing (IEEE VL/HCC 2017) this week in Raleigh, North Carolina.

The award recognizes technical papers from the past decade (plus or minus one year) with the most influence on visual languages and human-centric computing research or commerce. The VL/HCC conference focuses on the design, implementation and evaluation of computing languages that are easier to use, learn and understand by a broad range of people.

The inspiration for Mica came after observing the behaviors of modern programmers on the job. Programmers were sorting through a variety of libraries, toolkits and SDKs in their internet search results while trying to find distinctly different types of things — such as API classes, code snippets, definitions and documentation. The programmers struggled to predict which search results would provide what they were looking for, which led to wasted time and frustration. Since search engines like Google weren’t designed to provide this type of support, they lacked the cues programmers needed to efficiently review the search results. Mica checked the search query against a list of known API classes and methods to determine relevancy, and then provided weighted results with the organic Google search results. In addition to weighted keywords, Mica also provided icon labels beside search results to indicate the type of content contained on the page, including the Java icon for pages with source code and the Javadoc icon for official documentation.

“We are grateful to the IEEE VL/HCC conference for recognizing our important work," Myers said. "Jeff’s research helped catalyze a whole area of research, which we call ‘API Usability,’ meaning trying to improve how programmers can use Application Programming Interfaces (APIs), which are the libraries, frameworks and tools central to virtually all development.”

The IEEE began recognizing a retrospective Most Influential Paper in 2008, and since then, Myers has been the most awarded author. From 2012 to 2014, Myers led the way as the first to become a repeat recipient when he received the award three consecutive years in a row. This year, Myers is again the first to achieve a new distinction by receiving the award a fourth time.

All four of Myers’ award-winning Most Influential Papers have occurred with four different students as first author, speaking to Myers’ ability to conduct award-winning research with Ph.D. students.

“This unprecedented fourth impact award in a span of six years with four different Ph.D. students is a true testament to the incredible impact that Brad has had both on the field of human-centered programming, and on his students," said HCII Director Anind Dey. "It is not surprising that Brad also recently received the SIGCHI Lifetime Research Award for his work in human-centered programming support, among others. Brad’s impact is not just limited to academia, but many of the innovations in his programming work have been incorporated in both research and commercial systems — very meaningful impact!”

Jeff Stylos (CS 2009) worked on Mica as part of his dissertation. He is currently with IBM, where he is working on API design for Watson.

New this year at the conference is the opportunity for the authors of the 10- and 20-year retrospective awards to give a talk about their papers. Symposium attendees can listen to Stylos reflect on Mica’s impact on Thursday, Oct. 12, during the talk entitled, “Reflections on the Influence of ‘Mica: A Programming Terminology Aid.’”

Myers’ four papers which have won the Most Influential Paper Award for important influences on VL/HCC research or commerce over the last 10 (plus or minus one year) by the IEEE Symposium on Visual Languages and Human-Centric Computing include, by year: