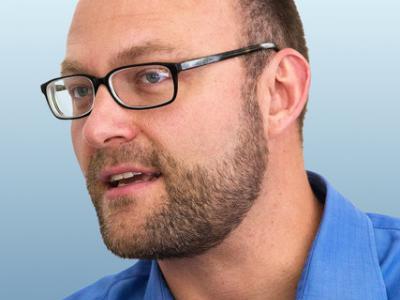 "Too often, people with disabilities have to adapt themselves to the ‘ability assumptions’ of their computing systems, but I wanted to reverse that burden by expecting more from our interactive computing systems," said Jacob O. Wobbrock, an associate professor at the University of Washington.

He is also a graduate of the Ph.D. program at the Human-Computer Interaction Institute at Carnegie Mellon University. This year, Wobbrock will be honored with the Social Impact Award at the 2017 ACM SIGCHI conference for his work making computers more accessible to people with disabilities. He reflects on the choices that brought him to pursue a doctorate degree in HCI, the mentors who shaped his education, and what he would tell incoming students today.

What inspired you to pursue a Ph.D in HCI?

In my undergraduate and master’s degree experiences at Stanford University, I had the pleasure of taking classes from, and working with, Professor Terry Winograd, a luminary in the HCI field and someone who inspired me to consider that many of the “hard problems” worth solving in computing were not just technical, but centrally involved human beings.

I also took classes from David Kelley, a founder of IDEO, and Bill Verplank, an interaction design pioneer and Xerox Star contributor. When you have people like these shaping your educational experience, it is impossible not to become enamored with the possibilities in the field of HCI.  I then worked in Silicon Valley as a user interface design-engineer for a couple of years before realizing that research, rather than practice, was my future. I was more interested in pursuing new foundational knowledge than new commercial products, and I had an interest in teaching in a university setting.

What drew you to accessibility as a research interest?

When I arrived at the HCII and began working with Professor Brad Myers, the first project with which I got involved focused on how to make handheld devices more accessible to people with motor impairments. Not only were we concerned with the accessibility of these devices, but also with having these devices work as assistive technologies to make desktop PCs more accessible.

This project I was on was named the Remote Commander and was part of Professor Myers’ larger Pebbles Project. From there, my work took on the challenge of making text entry more efficient and effective for people with motor impairments, and I developed the EdgeWrite text input scheme. EdgeWrite worked across many devices, from handhelds to joysticks to trackballs to discrete keys. It was a very versatile way to enable text entry from almost any device.

After graduation, when I became an assistant professor at the University of Washington, I continued with accessibility work, and a theme began to emerge. This theme, which eventually I would call “Ability-Based Design,” was based on the idea that everyday input devices could be made more accessible to people with disabilities if computers could take on the burden of making themselves better match their users’ abilities, rather than the other way around. Too often, people with disabilities have to adapt themselves to the “ability assumptions” of their computing systems, but I wanted to reverse that burden by expecting more from our computing systems. This approach led to adaptive systems that tailor themselves to users’ abilities. Ability-Based Design has since grown to become a new perspective and approach within accessible computing.

What was valuable about your time at the HCII?

My time at the HCII was great. I often reflect fondly on it. I think the tight-knit nature of the Ph.D. student cohort is my most fond memory. Everyone was pulling for each other, willing to help each other, having fun together, and working hard. I also reflect fondly on my relationship with my advisor, Brad Myers, and other faculty like Scott Hudson, John Zimmerman, Jodi Forlizzi, Jennifer Mankoff, and Sara Kiesler. These professors, and others, were willing to help, even if you were not their direct advisee. I felt they genuinely cared about my progress and success, and were invested in their students to a high degree.

Do you have a favorite memory from your time here?

A favorite memory was during the writing of my dissertation. A fellow Ph.D. student at the time, Darren Gergle (now a professor at Northwestern), and I were both writing 8-10 hours a day on our respective dissertations. We spurred each other on over instant messenger, checking in every hour or two to ensure the other person was hitting their milestones. We had an agreement that if we each achieved our daily objectives, we would meet at a restaurant within walking distance for a single drink at 11 pm. We’d have our drink, reflect on our progress, and then get up again the next day to do it all over again. This scheme lasted for a few months. The drink and chat at day’s-end were nice incentives to keep us going.

Do you have any advice for future students interested in similar work?

I have three pieces of advice for future students. The first piece of advice is to become a deep expert in at least one versatile skill, whether it is machine learning, computer vision, electronics, laboratory experiments, statistical methods, qualitative methods, design methods, or anything else that they can use to gain a foothold on difficult HCI research problems. I started my HCI research career as a practitioner-generalist, which meant I had to deepen my skills in at least one significant area that could be leveraged for tackling research problems. I was able to do this in a few topics over time, but it was hard going at first. Students who begin their research careers already having a specialized research-applicable skill will have an easier time gaining an advantage on certain research problems, and they can build their expertise from there.

My second piece of advice is to embrace and cultivate creativity and curiosity. Research is just as much about coming up with great ideas as it is about being able to carry them out. Having a deep skill will help students pursue ideas, but students need those original ideas in the first place, and the sooner those ideas come from the students themselves, the better. Creativity and curiosity need to be viewed as fundamental research skills.

My third piece of advice is to learn to write really well, and for students to conceive of themselves as authors first. As researchers, they will gain every audience and opportunity that they do first by way of their writing. Research is a communicative act, and that communication starts with the written word. Poor writing can sink otherwise good research.