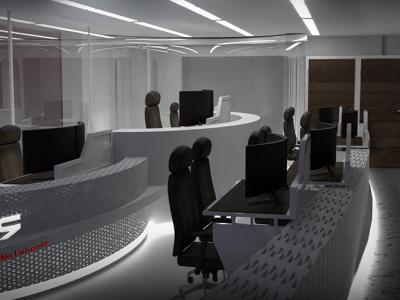 As their rovers explore unknown terrain on the moon's surface, researchers at Carnegie Mellon University will watch from the familiar confines of campus, nearly 240,000 miles away.

CMU’s Moonshot Mission Control, a new command center in the School of Computer Science's Gates Center for Computer Science, will provide state-of-the-art equipment to the crews of the Iris, MoonRanger and future space missions. Iris is scheduled to fly to the moon this year and will be the smallest, first American, first university-built and first student-built rover on the moon. MoonRanger, the first rover to search for evidence of water on the lunar surface, will explore the south pole after its scheduled flight to the moon in 2023.

"Carnegie Mellon is going to the moon, and building and outfitting Moonshot Mission Control is critical to success," said William “Red” Whittaker, University Founders Research Professor in the Robotics Institute. "The culmination of many years and countless hours of work by hundreds of individuals has brought us to a pivotal moment in the history of the university and space exploration. As CMU launches two rovers over the next two years, we will lead the way."

Moonshot Mission Control is planned for rooms 2109 and 2111 inside the Gates Center on CMU’s campus in Pittsburgh. The control center will feature operator workstations where crew members can plan and direct the movements of the rovers, monitor their data and images, and communicate with them and each other. Crew members will see telemetry, localization data and Fault List Evaluator for Ultimate Response (FLEUR) readouts at the workstations. Two large displays will show similar data for the whole team. The flight director will be able to control the movements of the rovers from a dedicated workstation.

"Once our rovers land on the moon, every second counts," said Lydia Schweitzer, a research associate in the Robotics Institute and head of CMU mission operations. "Communication windows during missions are extremely limited. We need to make decisions quickly. Moonshot Mission Control will be an ideal place for the crew to monitor and direct our rovers."

To make Moonshot Mission Control a reality, the team has launched a crowdfunding campaign so they can purchase servers, computers and communications equipment capable of maintaining contact on the moon. They'll also use the funds to transform an unused classroom full of desks and chairs into a cutting-edge command center. The team hopes to raise $80,000 for the project. Additional funds are being raised through sponsorships and gifts.

A past campaign to raise critical funds for the Iris mission was extremely successful. Donations poured in from 250 people and totaled more than $66,000.