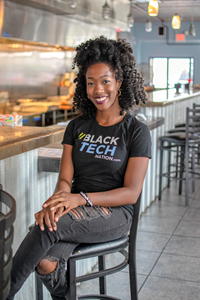 The School of Computer Science at Carnegie Mellon University is proud to announce the first seminar in the new Seminar Series on Diversity, Equity and Inclusion in Computer Science.

After noticing the lack of Black involvement in the tech industry, Kelauni built Black Tech Nation aka #DigitalWakanda, in 2018 to serve as a digital community and much-needed resource for the Black tech unicorns in Pittsburgh and beyond. //BTN now supports over 1200+ members and allies across the country and internationally, and works in partnership with several Pittsburgh foundations, local institutions, global tech companies, and successful venture firms who are dedicated to diversifying the color of tech.

In 2020, Kelauni formed Black Tech Nation Ventures with Partners David Motley and Sean Sebastian, a $50 million fund to support Black entrepreneurs and startups led by Black executives and people from diverse backgrounds. //BTNV has been featured by Bloomberg, TechCrunch, and AfroTech and has garnered pending investments from several Fortune 100 companies. She also founded Olivia Wayne in 2021, a recruiting agency for Black tech talent which serves as a sister recruiting company to the global Black Tech Nation network.

See the rest of the DEI in SCS Speaker Series schedule: http://www.cs.cmu.edu/dei/dei-seminars/